Indian railways are classified by speed and standard of facilities. Express trains with air-conditioning have high standards and usually have special names. Higher fares are charged for the better trains.

Launched recently in 2017, the Tejas Express is among the fastest trains in India, along with the Duronto Express, Shatabdi Express and Gatimaan Express, with an average speed of 130 kilometers per hour (80 miles per hour).

This type of train is fully air-conditioned with automatic doors. Furthermore, the train features large windows with great views, LED screens on the seat-backs, and other modern amenities.

There are regular carriages and executive carriages on a Tejas Express. Meals are provided free of charge, including coffee, tea, soup, butter, bread and biscuits.

Duronto Expresses are long-distance non-stop trains connecting major cities in India, including New Delhi, Mumbai, Chennai and Howrah. They are among the fastest trains in this country, with an average speed of between 60 and 75 kilometers per hour. Duronto provides comfortable and convenient interiors. Meals are included in the ticket price.

Rajdhani Expresses are luxury trains connecting major capital cities in India. They are among the fastest trains in the country with an average speed of 72 kilometers per hour (45 miles per hour), with only a few stops along the way.

The trains are air-conditioned, with modern facilities, including automatic doors and power sockets. Meals are provided for free during the journey.

The prestigious Shatabdi Express trains are luxury passenger trains, among the fastest in India. Their interior is of a high standard and the trains are air-conditioned everywhere.

Unlike the Rajdhani Express, the Shatabdi Express mainly runs in the daytime. So there are no sleeper-carriages, only ordinary-chair carriages. Meals are included in the ticket price.

Garib Rath is a fast fully air-conditioned train. The best part about this train is that its tickets are cheaper than other air-conditioned express trains. It is the perfect choice for anyone on a tight budget.

Garib Rath provides chair carriages and third-class sleeper carriages. The spaces between chairs and berths are narrower than for normal express trains. Passengers are not provided with free food.

The Gatimaan Express is a semi-high-speed train running between New Delhi and Agra, where the world-famous Taj Mahal is situated. The whole train is air-conditioned. Gatimaan is one of the fastest trains in India. It takes around 105 minutes to cover 195 kilometers from New Delhi to Agra.

Monorail is the latest type of train running on a single track. Indian Monorails currently operate in Mumbai. They are the first monorails in India. The purpose is to reduce traffic congestion in the city. Another monorail line is about to open in Chennai.

Slow passenger trains are called “local trains”. They usually make short journeys and stop at almost every small town and village. There is no air-conditioning on board. And there are no doors on the train. So passengers can easily get on and off. 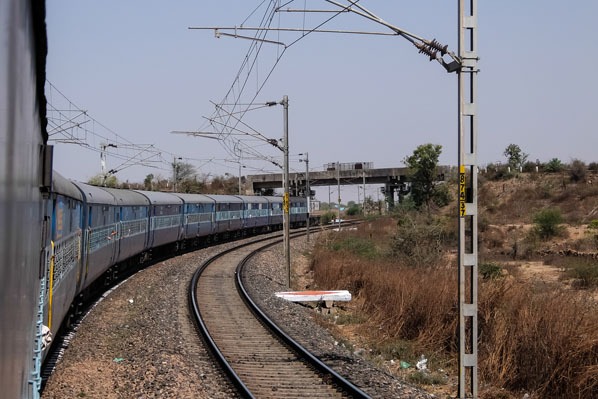 Suburban railways are an important means of transportation for commuters. Tickets can be bought even a few minutes before the train departs. And seats are not designated. So this type of train is always crowded and noisy.

The metro is an important means of transportation to reduce congestion in major cities in India. Cities with metro systems include Delhi, Mumbai, Chennai, Kolkata, Bengaluru and Lucknow.

These exquisite palace-like trains are meant for tourist spots and historical sites in India. Taking a luxury train is quite an experience in itself.

So far, there are eight luxury trains in service. They are the Palace on Wheels, the Mahaparinirvan Express, the Royal Orient, the Fairy Queen, the Deccan Odyssey, the Golden Chariot, the Maharaja Express and the Royal Rajasthan.

Toy trains, also known as Mountain Railways, date back to the British colonial period. They run in the mountains, on high bridges and through long tunnels.

The three most famous Toy Trains are the Nilgiri Mountain Railway, Darjeeling Himalayan Railway and the Kalka–Shimla Railway. All three have been listed as UNESCO World Heritage Sites.