Agra is an ancient city within the state of Uttar Pradesh, situated on the bank of the beautiful Yamuna River. From the 16th to 18th centuries, Agra was the capital of the Mughal Empire.

Hundreds of years of history leave this city with abundant heritage buildings and artistic achievements. The Taj Mahal, one of the new Seven Wonders of the World, and Agra Fort are two of the most famous.

Agra is in the middle of Uttar Pradesh, between Delhi and Kanpur. It is an important transportation hub connecting Rajasthan and Uttar Pradesh. There are more than six railway stations in Agra but only two of them are frequently used: Agra Cantt Station and Agra Fort Railway Station.

The full name is Agra Cantonment Railway Station. This station is the busiest in Agra. Most long-distance trains running to the country’s main cities, such as Delhi, Mumbai, Chennai, and Bhopal, depart from this station. Agra Cantt Station is located in a busy area, near the Sadar Bazaar, with convenient surroundings. It is about 9 kilometers away from the Taj Mahal mausoleum.

There are two bus routes in Agra, with air-conditioned and non-AC buses. One of the routes starts from Agra Cantt Station. You can easily get to the Taj Mahal and the Red Fort by bus.

Traveling by taxi is a comfortable way to get around Agra, especially the prepaid air-conditioned taxis. Couples or travelers who plan to visit the tourist attractions in one day can reserve a taxi for a full day at a cost of about 900 rupees.

The rickshaw is a common means of public transportation in India. The price is negotiable and it is an experience in itself. You will find a lot of rickshaws waiting outside the station.

If you are not in a hurry, it is a good idea to take a rickshaw to get around the city. You can also reserve a rickshaw for a full day, at a cost of about 650 rupees.

Agra Fort Railway Station is situated just behind the well-known tourist attraction, Agra Fort. It is within walking distance of the fort’s entrance and is 3 kilometers away from the Taj Mahal. Trains to Jaipur, Kolkata, and Varanasi depart from this station.

It is easy to get to scenic spots from Agra Fort Railway Station. It takes 15 minutes to get from the station to the Taj Mahal with a rickshaw at a cost of about 30 rupees.

Other Railway Stations in Agra

Here is the information for four more stations in Agra:

Kolkata is the capital of West Bengal. There are five major railway stations serving the cities of Kolkata and Howrah. 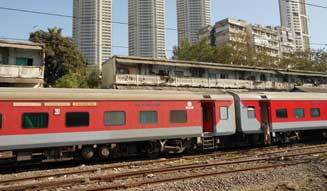 Mumbai, also known as the “London of India”. There are five major railway stations in Mumbai.