Home Trains Between China and Mongolia

Trains Between China and Mongolia

History of the Trans-Mongolian Railway

The Trans-Mongolian Railway was built in the middle of the 20th century, from Ulan-Ude, Russia, to Beijing, the capital of China, crossing the Gobi desert and passing through Mongolia’s capital, Ulaanbaatar.

The Chinese track gauge is 1,435 mm. Track gauge in Mongolia and Russia is 1,520 mm. So the train needs to have its bogies changed at Erlian, the border city between China and Mongolia.

What’s in the train?

These carriages have 2 berths in private compartments, with lockable doors; also known as deluxe soft sleeper. The upper berth can be folded up during the day. Each compartment has a power socket, a LED TV and a small table.

These have 4 berths in a private compartment, called hard sleepers in China. The upper berth can be folded up during the daytime.

A western-style toilet is equipped at the end of each carriage. The made-in-China train has a shower in first class 2-berth carriages.

Free boiling water for drinking is available on each carriage.

1. Several power sockets are available in each carriage. But you may find they are unable to charge your laptop, due to the unstable voltage. Remember to bring a converter.

2. Toilet paper usually runs out. So always bring your own.

3. Food onboard is expensive and there is a limited choice. So bring some food with you. You can also buy local food at platforms when the train stops.

How to Apply for Visa

You need two visas – Chinese and Mongolian – for a Trans-Mongolian train.

How to Apply for a Chinese Visa:

You can either apply for your visa via a travel agency or through the official website //www.china-embassy.org/eng/visas/hrsq/.

Documents you need for a Chinese visa:

How to Apply for a Mongolian Visa:

It would be easiest if you arrange a Mongolian visa through a travel agency. The following documents are needed: 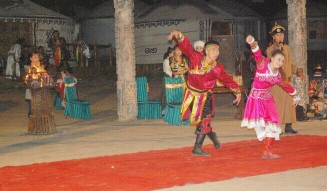