The nine stations are basically built around the subway line. Most railway stations in Russia are named after the biggest station along the rail lines. For example, Belorussky Station, one of the train stations in Moscow, serves the rail line to Belarus.

Constructed between 1844 and 1851, Leningradsky is the oldest of the 9 stations in Moscow. This station mainly serves northwestern rail lines, including domestic trains to the noble Novgorod, Pskov and St. Petersburg; and international trains to Tallinn and Helsinki.

The station is conveniently covered with Wi-Fi, and equipped with facilities including mother & child room.

Opened in 1870, Belorussky Station was once the second largest train station in Moscow. It serves rail lines to the west and southwest of Russia, and international trains to Brest, Vilnius, Warsaw, Berlin and other cities in central Europe.

Constructed between 1913 and 1940, Kazansky Station is an architectural masterpiece of Russia, and also one of the biggest stations in Europe. Trains to southern Russia and south of Ural Region depart from this station.

Inside the train station, you will find a waiting lounge, stores, restaurants, a mother & child room, medical room and luggage office. Toilets in the station are chargeable.

Built in 1896, Kursky Station is the largest and busiest station in Moscow. This station serves long-distance trains to Kursk, Russia, then stretches towards Ukraine. High-speed trains from Moscow to Nizhniy Novgorod and St. Petersburg also depart from here.

Yaroslavsky Station was built in 186. It is one of the largest of the nine stations in Moscow. The station building is a landmark of Moscow.

This station is located on Komsomolskaya Square, close to Kazansky Station and Leningradsky Station. Yaroslavsky serves train lines to the north of Russia, the Ural region, Siberia and the far East. It is the terminal of the world-renowned Trans-Siberian Railway. International trains to Mongolia and China also depart from this station.

Paveletsky Station was originally built in 1900 and reconstructed in 1980. This station mainly serves train lines to the southeastern region of Russia. Domestic trains to Yelets, Volgograd, Tambov and Astrakhan, and international trains to Almaty and Baku depart from Paveletsky Station.

Kievsky Station is known to be the most beautiful station in Moscow. It is situated next to the Europe Square and overlooks the Moscow River.

This station mainly serves train lines to western Ukraine and southeastern Europe, including Budapest and Sophia.

Opened in 1902, Savyolovsky Station is the youngest among the nine stations in Moscow. This is a small train station serving train lines to the northern suburbs of Moscow.

Constructed between 1897 and 1901, Rizhsky is a small station serving the train lines to Riga and other cities in Latvia. 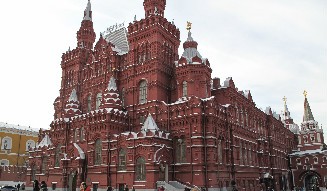 How to Take a Trans-Siberian Train