Chinese trains can be divided into seven classes according to their running speed and service. You can tell the train class by the letter that is prefixed to the train number. 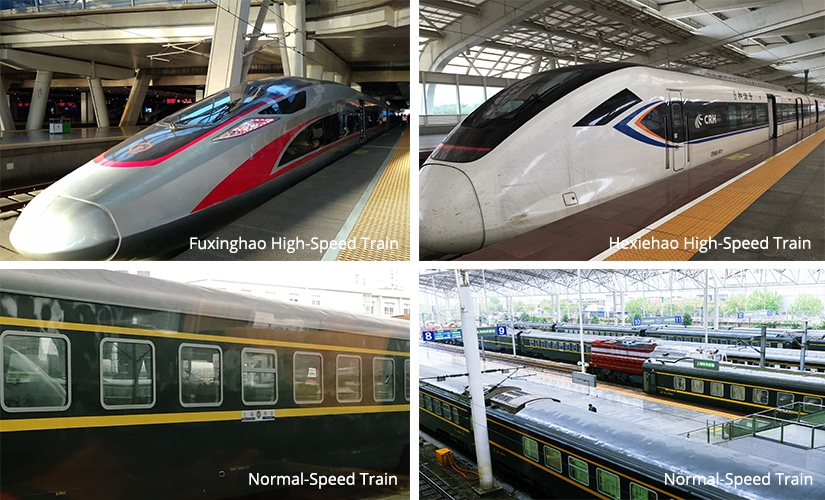 Train numbers that are prefixed with the letter G, D, or C are high-speed trains.

G trains usually run on long-distance and middle-distance rail routes, including Beijing–Shanghai, Beijing–Xi’an, and Shanghai–Guangzhou. High-speed trains to and from Hong Kong also include G trains.

D trains mainly run on middle and short-distance rail lines, such as Chengdu–Chongqing, Guangzhou–Guiyang, and Pingyao–Xi’an. On some routes, ticket fares for D trains are cheaper than ticket fares for G trains.

Overnight high-speed trains also include D trains, such as D701/D702 between Beijing and Shanghai.

C trains are intercity trains, which operate between neighboring cities, such as Beijing and Tianjin, Changsha and Zhuzhou, and Guangzhou and Shenzhen. C trains have lower top running speeds of 200 kph (124 mph).

Z trains are also called non-stop express trains. They are the fastest among regular trains. They operate on long-distance rail lines between major cities, with only a few main stops along the way.

Z trains have a top running speed of 160 kph (99 mph). They mainly run between capital cities, such as Beijing–Shanghai, Beijing–Xi’an, and Beijing–Nanning.

T trains are called express trains, with a limited number of stops along the way. This is the second fastest regular train type. The top speed is 140 kph (87 mph).

K trains are fast trains traveling at a top speed of 120 kph (74 mph). They have more stops along the way than T trains.

Ordinary train numbers are made up of four digits. There is no letter prefixed to the train number. This is the slowest type of train in China. The trains stop at almost every city along the rail route. At present, this type of train is rarely used.

Facilities/Services on Trains in China

Business class is usually in the first or last car of a high-speed train. Business class is the most expensive type of seat. The ticket fare is twice as much as first class and three times that of a second-class ticket.

First class is also located in the front or back car of a high-speed train — only one or two first class cars are available. Compared to second class, first class is quieter and more comfortable.

The ticket fare for a first-class ticket is almost twice as much as a second-class ticket.

Second class is the most common and cheapest class on high-speed trains. Second-class seats have less elbow and legroom than those in first class. There are no automatic doors to separate the cars from each other so, compared to first class, second class can be noisier.

Soft sleepers are available on overnight high-speed trains, which are all D trains. There are two types of soft sleeper: an ordinary soft sleeper and a new soft sleeper.

Each compartment has a door that can be locked from the inside to provide a private and quiet environment.

The vertical space for both soft sleeper bunks is spacious enough for passengers to sit up. Each bunk is 75 cm in width and 190 cm in length. The distance between the two lower bunks is about 50 cm.

There is a small table between the two lower bunks. A pillow and blanket are provided for each bunk.

Besides the luggage rack, passengers’ baggage can also be put under the lower berths or table, or in the closets beside the upper bunks.

There are two rows of double-decker bunks on two sides of the car. Both rows and the aisle are parallel to the train’s running direction.

Each berth is located by the window. A curtain is provided for each bunk for privacy. Each bunk is also equipped with a reading lamp, a power socket, a small foldable table, and a coat rack.

A deluxe soft sleeper is the most luxurious class on regular trains and is only available on a few trains. The ticket price is twice as much as a soft sleeper ticket.

Each deluxe soft sleeper car has 8–10 private compartments with two bunks (one lower and one upper) in each compartment. Each compartment has a lockable door for privacy.

There is also a sofa, a small table, closets, and power sockets inside the compartment. On some trains, each deluxe soft sleeper compartment has its own washbasin and toilet.

A hard sleeper is popular with budget travelers. The ticket fare is cheaper than a soft sleeper ticket.

Hard sleeper compartments have an open-plan design. There is no door or curtain for privacy. Each compartment has six bunks (two upper bunks, two middle bunks, and two lower bunks). The prices for the lower/middle/upper bunks are not the same — they increase in price: lower>middle>upper.

A hard sleeper bunk is narrower than a soft sleeper bunk. Each bunk is 60 cm in width and 180 cm in length.

The bunk’s height is 90 cm, 65 cm, and 65 cm for the lower, middle, and upper bunk, respectively. Passengers on middle and upper bunks can hardly sit up straight. During the daytime, some passengers will sit on the lower bunks, using them as public couches.

The hard seat class is available on all regular trains. The ticket fare is the cheapest among all the classes.

Every set of two rows is arranged face-to-face. Some seats face the opposite direction to the way the train is going. The seats are hard and the seatback is not adjustable.

Passengers holding standing tickets will stand in the hard seat cars. During holiday periods, it is very crowded, noisy, and smelly in hard seat cars with people standing in the aisles, car connections, and even in the toilets.

It is not recommended to book hard seat tickets during holiday periods or for a train journey that is longer than 5 hours.